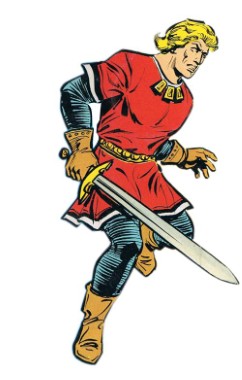 De Rode Ridder ("The Red Knight") is a Belgian-Flemish comic book series set in medieval Europe. It stars the title character Johan, the Red Knight, easily recognizable by his red tunic. The character was originally conceived by Leopold Vermeiren as the main character in his short stories in 1946. Willy Vandersteen (most famous for Suske en Wiske) adapted the stories and the character into a comic book series in 1959. Other writers took over later, including Karel Biddeloo. Publication of new albums continues to today.

Most of the stories are characterized by subseries and stand-alone albums (i.e. depicting a story which are not related to any other album as they do not impact the story line or are mentioned in other albums), in which Johan travels as a lonely noble knight. There are however also several story arcs, including two in which Johan serves as a knight in King Arthur's court. The first stories were limited to Europe, but later adventures brought him to Egypt, South America, China and even outer space. The exact time period in which the stories are set is also hard to determine, since Johan has both encountered King Arthur from the Dark Ages, as well as having fought in the Battle of the Golden Spurs in 1302 (although he seems to have time traveled for the latter event at least, by way of The Fair Folk).