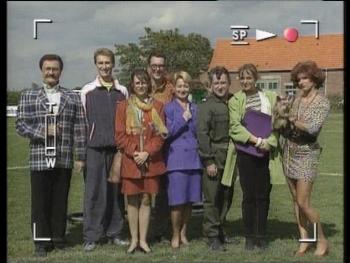 F.C. De Kampioenen was a hugely popular Flemish TV sitcom about the (mis)adventures of a local amateur soccer (in Dutch the word "voetbal", which actually translate to "football") club and their members. The series aired in 1990 and ended almost two decades later, in 2011. The show remains one of the most popular TV shows in Flanders and was mostly considered to be a family show, appreciated by children just as much as adults. The stories took place on the soccer field, but also in the local bar and the respective homes of the main characters.

The huge popularity of the show turned it into a Cash Cow Franchise, which spawned musical records, toys and a comic book series, which remains a best seller to this day. Older episodes are still repeated and available by viewer demand on TV, but even now the series itself has ended, the franchise has continued its success as a movie series, with four feature films that came out in 2013, 2015, 2017 and 2019, as well as a televised Christmas special in 2020.