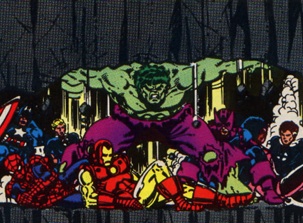 "Beneath 150 billion tons, stands The Hulk — and he's not happy!"
"Don't worry, compared to your lives, this rock isn't so heavy. *Nuh!* Even if I run out of strength, I'll carry it with my spirit!"
— Shuh, Fist of the North Star

Rather than let their friends be squished like a bug by a Descending Ceiling, falling boulder, or one of those hero-seeking falling pillars, the Big Guy will step in, catch the falling object, and hold it up long enough for their friends to escape. Often utilizes the Atlas Pose.

Characters don't need to have Super Strength or huge muscles to use this trope, so almost anyone can invoke it. However, weaker characters will likely face a Heroic Sacrifice as they are stuck holding up something that will crush them if/when they let go. That said, expect melodramatic characters intent on being a Martyr Without a Cause to be pulled to safety by their allies.

Not to be confused with Load-Bearing Boss (but that may very well lead to this trope). Barrier Warriors will frequently do this. Don't think too much about why the falling object doesn't break under its own weight and collapse all around the character, or how the ground underneath the character can support all that weight being channeled through the Load-Bearing Hero's feet.

Compare the more pragmatic Tuck and Cover. Distantly related to the Barrier Maiden, whose "load bearing" duty is more metaphorical and less literal.

Not to be confused with We Cannot Go On Without You, and actually having fairly little to do with the Load-Bearing Boss.