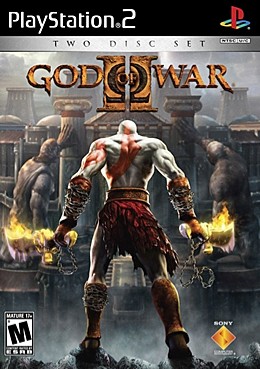 God of War II is the sequel to God of War, released for the PlayStation 2 in 2007. Kratos, now the new God of War, leads his Spartans in a bloody conquest of Greece, heedless of the mutterings of other gods who think he's out of control. Zeus takes matters into his own hands by stripping Kratos of his godhood and slaying him. Kratos escapes Hades with the help of the titan Gaia, who tells him to travel to the Island of Creation, where the Sisters of Fate work the Loom of Fate and can change his destiny.

The game ends with Kratos rounding up the Titans and leading a siege against Olympus itself, cutting to black just at the moment their battle is about to start. Three years later, God of War III would release, picking exactly where God of War II left off.

God of War II contains examples of the following tropes: