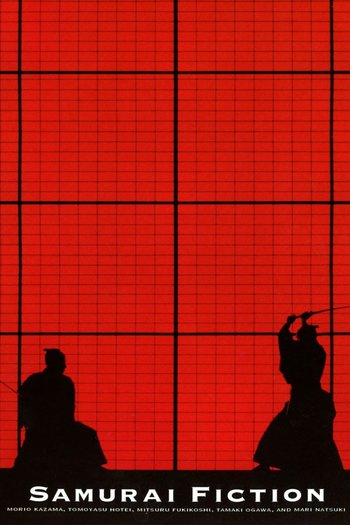 A staple of samurai fiction, that started with the film Samurai Fiction, and has since spilled over into other areas of particularly Japanese, but even some western media.

Often overlapping with a Single-Stroke Battle, when someone deals a killing blow, the screen turns stark red, black, and white for extra dramatic effect. Characters are typically rendered as silhouettes, or extremely high contrast. The red and the shadows inter-playing may stand in for High-Pressure Blood.

This isn't just for killing strokes however. Sometimes its a way to introduce a samurai rather than end him. In this sense the red background is more evocative of a setting sun or a bloody moon effect.

Either way it let's you know you're dealing with either a serious fighter, or a serious attack.

Compare Single-Stroke Battle. Also due to the sister genres of samurai and westerns, could be part of a Showdown at High Noon, or gun duel. In which case you may sub in red for yellow for all that dust. See also Red Filter of Doom for red lighting in a more general sense, and Black Screen of Death when the screen flashes to hide the action rather than stylizing it.