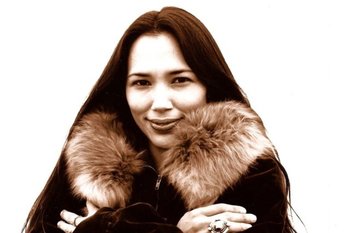 "Listen with your heart. You will understand."
"If you listen hard, everything has something to say."
Advertisement:

Irene Bedard (born July 22, 1967) is an American actress, hailing from Alaska, and has been one of the more prominent Native American actors in recent years.

Her career started with a bang in Lakota Woman: Siege at Wounded Knee — depicting a real life standoff between the U.S. government and Native Americans at a reservation in Wounded Knee back in the 1970s. She was nominated for a Golden Globe for her first role. Her second film was Squanto: A Warrior's Tale, in which she played another lead role. But it's probably her third role that she is best known for.

Disney's 33rd animated film was Pocahontas, a dramatization surrounding the legend of Pocahontas and John Smith. After a long search, Irene won the title role and was the voice of Disney's first American Princess.note Although the real Pocahontas is not considered a princess in the European sense, she was presented as such to the English, and is an 'honorary' princess in the franchise, along with Mulan. Irene has continued to voice Pocahontas across the Disney franchise, even reprising her role twenty years later in Ralph Breaks the Internet.

Other roles she might be recognized for are Manic Pixie Dream Girl Suzy Song in Smoke Signals, Margaret Light Shines of Into The West or else Kimi Lucero of The Mist. In addition to acting, she also has her own production companies - Sleeping Lady Films and Walking Giants Productions - campaigning for better representation of Native Americans in media.