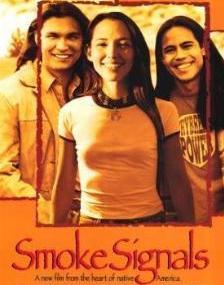 A New Film From the Heart of Native America
"Hey, Victor!"
Advertisement:

Smoke Signals is a 1998 comedy-drama film directed by Chris Eyre. It is the first movie to be written, directed, and co-produced by Native Americans.

Geeky, orphaned Thomas (Evan Adams) lives on the Coeur d'Alene reservation in Idaho where he's reluctantly looked after by stoic Victor (Adam Beach), whose long-gone father Arnold (Gary Farmer) saved Thomas from the fire that killed his parents. When Victor learns of Arnold's death in Phoenix, Thomas says he'll pay the expenses of the trip if he can accompany Victor. The young men reach an understanding during their travels, while Victor struggles to deal with his complicated feelings about his father and the past.

Adapted from the short story This Is What It Means To Say Phoenix, Arizona, featured in the short story collection Lone Ranger And Tonto Fistfight In Heaven by Sherman Alexie, who also wrote the screenplay.