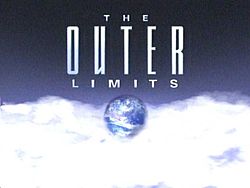 "Please stand by."
"There is nothing wrong with your television. Do not attempt to adjust the picture. We are now controlling the transmission. We control the horizontal and the vertical. We can deluge you with a thousand channels, or expand one single image to crystal clarity...and beyond...

We can shape your vision to anything our imagination can conceive. For the next hour, we will control all that you see and hear....

You are about to experience the awe and mystery which reaches from the deepest inner mind to.... The Outer Limits."
— The Control Voice
Advertisement:

Exactly 30 years after The Outer Limits (1963) was Screwed by the Network in 1965, the series was once again brought to the airwaves (by Showtime and later by the Sci-Fi Channel) for a new generation to experience stories that reach from the deepest inner mind to the, well...you know.

Thanks in part to the boom in popularity of supernatural and Sci-Fi shows at the time, like Star Trek: The Next Generation and The X-Files, it was decided by the Higher Ups that the 1960s cult classic The Outer Limits would be revived in the hope to capitalize on similar success (which is oddly similar to how the original series was commissioned in the first place). And unlike the short-lived run of its predecessor, this series would indeed be successful enough to last 7 seasons, from 1995-2002; continuing on in syndication (currently on terrestrial station Comet) to this very day.

The format remains mostly intact, though it does notably have less emphasis on the Monster of the Week being its main plot basis. Generally, the stories involve exploring a specific scientific concept and its effects on humanity, or projects a completely alternate society that may highlight the flaws of our own (through Fantastic Racism for instance). A lot of episodes drift towards being cautionary tales (or just being cruel) so expect a lot of Bittersweet or Downer Endings. Also of note is that, oddly for an anthology series, each season would usually involve a Clip Show which would attempt to tie some of its unconnected stories together (more on that below).

The series's Control Voice is supplied by Kevin Conway, and the surreal artwork of the introductions can mostly be attributed to Jerry Uelsmann. The series is available in DVD sets. If you were looking for the original 1963 series, that is over here.