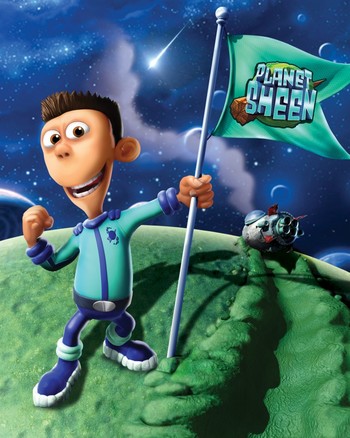 A Spin-Off of the Jimmy Neutron franchise, putting Comic Relief character Sheen Estevez in the spotlight.

One day, Sheen sneaks into Jimmy's lab and finds his new rocket, made just for one. He then presses a button and is blasted off into the regions of outer space.

Before too long, he finds himself accidentally stranded on Planet Zeenu, four million and one lightyears away from home. There, he becomes an ambassador to the local purple-skinned Zeenuians, the Emperor of whom believes him to be a hyper-intelligent being sent from the heavens to guide them. He makes some new friends too, including Doppy (an alien who looks remarkably like Carl), Aseefa (a beautiful Glimmorian princess, with whom Sheen becomes smitten), and Mr. Nesmith (a highly intelligent astronaut chimp).

Unfortunately, an evil villain named Dorkus Aurelius, whose house Sheen accidentally wrecked during his crash-landing, is bent on destroying him. With the help of his new friends, Sheen must survive the plots of Dorkus and repair his rocket before anyone notices he's gone!

Premiering alongside T.U.F.F. Puppy on Nickelodeon October 2, 2010, about half of the first season was aired on Nickelodeon before they moved new episodes to be broadcast on Nicktoons only. The first, and only, season finished airing on February 15, 2013, resulting in no resolution to Sheen's return to Earth.

No connection to Charlie Sheen or Martin Sheen, or whatever planet they're from. note Though Sheen the character is named after Charlie.

Pinter: Alright, *picks a conversation starter card* if you were to go back in any time in history, when would it be?
Dorkus: Easy. My own birth to applaud my mother.
Dorkus: I hate that as a child I never got the Cloaked Avenger Action Figure with Magic Fire Breath, because my mother was all, *makes his voice higher pitched* "No! You'll burn down the house! Nyehnyehnyehnyehnyehnyeh..." It's all I ever asked for...
later in the same episode
Pinter: Ah, you see good things can happen to you when you open your heart.
Dorkus: Ooh... I wonder if it has the Magic Fire Breath my mother thought was "Oh so dangerous!" *he points the action figure towards his house and activates the "magic fire breath" causing his house to burn up and collapse* Oh Grock!
Pinter: Oh, it works...
Dorkus: *walks out of his hiding place towards the group consisting of Sheen, Aseefa, the Emperor, Nesmith, and Doppy* Hello all.
Nesmith: *gasps* Where did you come from?
Dorkus: My mother...