Literature / The Chronicles Of Jonathan Tibbs 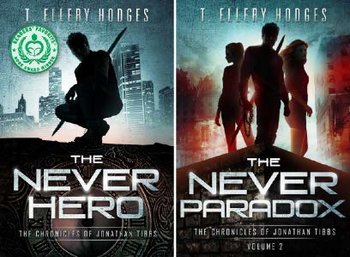 At the gates between worlds. In a war outside of time. He fights for us.

"Only trust a man with power when he is wise enough not to want it."
Tagline for The Never Hero

The Chronicles Of Jonathan Tibbs is a Science Fiction series written by T. Ellery Hodges. Currently, it consists of two volumes:

The series focuses on the titular Jonathan Tibbs, an ordinary man drafted by an alien named Heyer to defend the world from interplanetary threats.