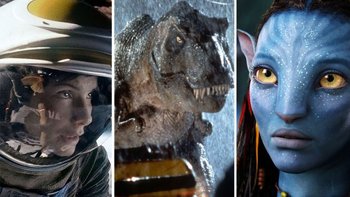 Tour outer-space, flee from dinosaurs, and have hair-sex with a blue alien babe all in the comfort of your own living room!* Funnily enough, only the blue lady is 100% CGI: the Jurassic Park shot is of the live-action animatronic!
"How'd you do this?"
— Dr. Alan Grant

Computer-generated graphics have been a revolution in filmmaking. From a slow start in the late seventies, through the eighties where they were seen as a less-than-fully-practical utility, to the nineties where they started becoming big-budget showpieces, and beyond when they started to become nearly ubiquitous in all blockbusters and even many less Special Effects-heavy films and became cheap enough to appear on TV.

Computer-generated images have given us Serkis Folk, extreme slow motion, and the only chances at effective screen adaptations of Science Fiction and Fantasy novels. On the other hand, its early days were full of very obvious clashing, Special Effect Failure, and Narm. In fact, it still can be, depending on how powerful the machines are and how skillful the animation, lighting and compositing is.

For this reason, some filmmakers have had a sort of Hype Aversion to the use of computer-generated effects, proudly sticking to Practical Effects, while others have leapt on it as a chance to realise what they were imagining all those years before.

Note: Due to the extensive use of CGI, try to keep examples to the really interesting ones.