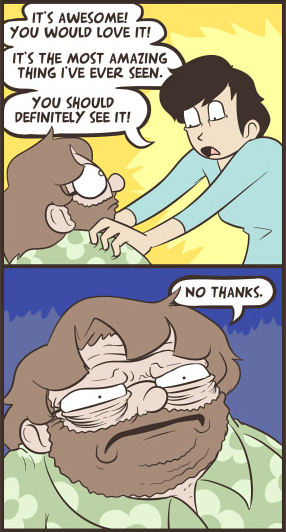 Recommendations are strange things. If one person thinks you'd like something, you'll probably rush and check it out. Even if they're wrong, it can't be that bad, right?

Why is it that when twenty people say you'd like something, you'll just keep putting it off more and more?

This is what we call Hype Aversion: the specific avoidance of a work mainly because of how much you're told you'll like it.

There's a number of reasons for why this happens: Maybe it's a genre you're not so keen on. Maybe you're afraid that it's popular because it appeals to the Lowest Common Denominator. Maybe you're afraid that you won't enjoy it, and will have to deal with the fact that people you thought you knew don't really share your tastes, or that you felt lied to because they thought you would like it. Maybe you dismiss the recommendation because it came from an individual or group you personally distrust. Maybe it's how, as more people and the Hollywood Hype Machine recommend something, the probability of meeting someone disconcertingly obsessed with it approaches one. Maybe the fandom in general has a certain level of squick to it that makes you a little uncomfortable. Maybe you just are sick of hearing about it because you accepted it wasn't your cup of tea in the first place, but it's very hard to ignore it because you keep hearing it everywhere.

It could be that you start out putting it off for later, but as more and more people bug you about it, you reject reading/watching/whatevering it multiple times and develop a habit of it. Maybe it's become a strange sort of anti-establishment pride that you refuse to check out something so many have liked. Bonus points if they express shock at how you've not seen it and peer-pressure you so much that you feel your independent thinking is getting seriously threatened. Maybe you're afraid that you'll like it too much, thus losing interest in what you previously enjoyed more. Maybe you feel you're not worthy. Maybe you're just that stubborn. It could also be because of this little thing called Reverse Psychology...

In any case, you might realize that yep, it's as great as everyone says... or at least not so bad that you'd be offended that people thought you would like it. On the other hand, you might end up a little let down — given all the hype, shouldn't Final Fantasy VII, Watchmen, Fate/stay night, The Elder Scrolls V: Skyrim and Baldur's Gate really be able to cure cancer, impotence or chronic bedwetting, give a determined, suicidal-averting reason to go on living, and guarantee one an automatic gate pass for Heaven?

Anything billed as the next incarnation of a popular work will get this.

Can lead to blind bashing if the aversion goes far enough. Of course, if one is able to get over such aversion, it can result in I Do Not Like Green Eggs and Ham.

Contrast Hype Backlash, where the hype doesn't prevent you from watching, but taints your reaction when you do. See Bile Fascination for the exact opposite of this trope. Related to the Hollywood Hype Machine, which starts the ball rolling for more mainstream successful ones.