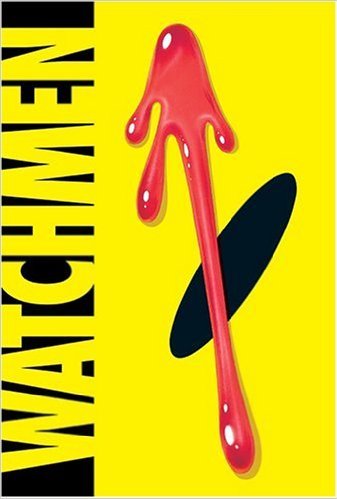 The deconstruction of the superhero genre.

Watchmen by Alan Moore and Dave Gibbons is a 12-Issue Mini Series that ran from September, 1986 to October, 1987, published by DC Comics, and subsequently printed as a single volume graphic novel.

The story is set in an Alternate Universe that mirrors the real world of the late 20th century, with just one key difference. In the real world, the runaway success of Action Comics #1 in the summer of 1938 led to superheroes becoming a major sensation in American pop culture; in this world, it inspired a wave of real people to take to the streets in colorful costumes to fight crime like their heroes in the comic books, leading to the formation of an organisation known as the Minutemen.

By the 1940s, superheroes are a very real part of American life and culture, but they're ultimately unprepared for the new status quo of the early 1960s, when the U.S. government's experiments in theoretical physics lead to the birth of "Doctor Manhattan", an omniscient Physical God with the power to remake the universe at will. The latter half of the 20th century sees the US winning The Vietnam War with Doctor Manhattan's help, leading to a greatly escalated Cold War.

By the start of the story, the aging members of the first generation of superheroes are retired or dead, and their would-be successors have been forbidden from crime-fighting by the passage of the Keene Act during Richard Nixon's third term in 1977. By the 1980s, the world is at the brink of nuclear war, and most of the world's superheroes have returned to their civilian lives. One of the only holdouts is the mysterious "Rorschach", a mentally unstable renegade crimefighter who lives off-the-grid in New York City, pursued by the NYPD for his long history of illegal vigilantism.

The plot of Watchmen begins with the murder of Edward Blake, a former member of the Minutemen who went on to become a feared Black Ops agent for the US military. While investigating Blake's murder, Rorschach delves into his past as the superhero "The Comedian," and begins to suspect that someone deliberately targeted him for his superhero past. As he follows a trail of clues through the seedy underbelly of New York, Rorschach seeks out his former acquaintances — Dan Dreiberg ("Nite Owl"), Laurie Juspeczyk ("Silk Spectre"), Doctor Manhattan (formerly Jon Osterman), and Adrian Veidt ("Ozymandias") — believing that their past adventures may have sown the seeds of a new threat. But Blake's murder is only the start of a bigger mystery—one that will ultimately bring the heroes together for one final battle, and force them to question everything that they believe in.

The series is perhaps best known for being one of the first serious attempts at examining how modern society and culture might really react to the presence of costumed vigilantes with secret identities (though it wasn't the first to deconstruct it, as Marvel Comics did quite a bit of this in the Silver Age — what sets Watchmen apart is how it framed its narrative against the backdrop of the Cold War in a more realistic light). More broadly, though, the whole story is a protracted examination of the conflict between power and morality. It's no accident that it was written towards the end of the Cold War, when the United States and the Soviet Union — two superpowers of a different sort — were reaching the apex of their power on the world stage. At the heart of the story's complex web of character relationships, the superheroes are ultimately divided by questions about the values and pitfalls of moral systems. Several characters are unabashedly amoral nihilists, and consciously reject the notion of following ideals; others fall to the opposite extreme, and steadfastly refuse to compromise their ideals for any reason. The story demonstrates the perils of both ways of thinking, while also following the struggles of ordinary people caught in the middle, who are just trying to do the right thing.

For the other works titled Watchmen or follow-ups, see the franchise's page.

Warning: As Watchmen came out three decades ago, there will be untagged spoilers from this point forward.

"Nothing ends, Adrian. Nothing ever ends."