"Have a Nice Day" Smile 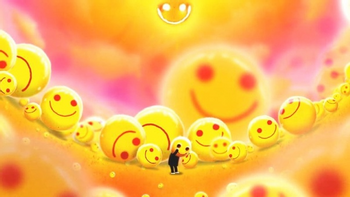 99. A smiley face is not used to mark a minefield.
— Skippy's List
Advertisement:

The yellow smiling face with the message "Have a Nice Day". Gained popularity as a Fun T-Shirt, and now has some parodies.

Originally designed to stop postal employees from, well, Going Postal. The smiley face is also commonly used as a sort of ironic symbol of psychopaths, typically those who are also mentally ill.