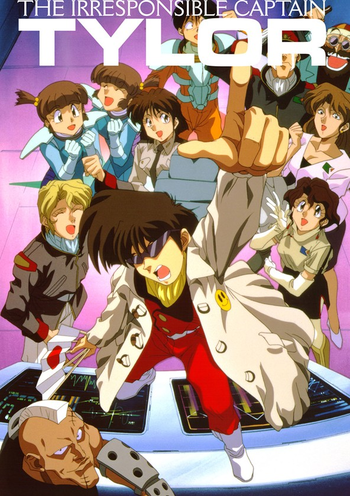 "Either he's a fool or an out-and-out genius."
— Dr. Kitaguchi on Justy Ueki Tylor
Advertisement:

In the distant future, the United Planets Space Force is poised on the brink of war with a race of aliens known as the Raalgon. As the tensions start to boil over, along comes Justy Ueki Tylor, a young man who joins the military hoping to find a cushy office job somewhere and take it easy.

Fate has other things in mind for our hero, however: Tylor soon goes to deliver a pension check to the highly respected Admiral Hanner, and ends up accidentally saving him (along with Tsundere love-interest Yuriko Star, and Hanner's cute twin granddaughters Emi and Yumi) from Raalgon agents posing as anti-war terrorists. His "heroism" gains him a rapid promotion to lieutenant commander and an assignment to captain the destroyer Soyokaze (which translates to "Gentle Breeze").

Unbeknownst to Tylor, the Soyokaze is considered a dumping ground for the space fleet, and his frustrated superiors are trying to get rid of him before he causes any more chaos. Unfortunately, this backfires, and Tylor ends up leading his rag-tag crew into a series of victories (much to the chagrin of both his superiors and his subordinates, especially Yuriko and Tylor's straight-man second-in-command Lieutenant Yamamoto), with the fate of the whole war soon ending up in their hands.

He also manages to gain attention among the enemy, including the beautiful teenage Empress Azalyn. All the while, both the other characters and the audience are left wondering if Tylor is a lucky nimrod, or a brilliant strategist.

The Irresponsible Captain Tylor is a 26-episode anime series directed by Koichi Mashimo and produced by Tatsunoko Production which aired on TV Tokyo in 1993. The series is an adaptation of Hitoshi Yoshioka's The Most Irresponsible Man In Space series of Light Novels, with the anime taking its name from the first book in the series. Moshimo followed up the anime series with a 2-part OVA, Tylor's War, also known as An Exceptional Episode, in 1994. Eight additonal OVA episodes directed by Naoyuki Yoshinaga were released in 1995 and 1996. The series is distributed in North America by Nozomi Entertainment, who created the English dub when they were known by their parent company's name, Right Stuf. The series aired subtitled in the United States on the International Channel in the early 2000s.

Interesting Fact: Captain Tylor's first and second names (Justy Ueki) are a pun on the words 'Just wake', as in "Just Wake Tylor." "Just Lucky" can be derived as well, which seems appropriate.

On July 11, 2017, a sequel of sorts, Musekinin Galaxy Tylor has been broadcast, with a descendant of Justy named Banjo Ueki Tylor as the main character, and finally ended on September 26th, 2017 with 12 episodes. If you're hoping for some of the charm from the original, you won't find it there. Each episode was a mere 3 minutes.