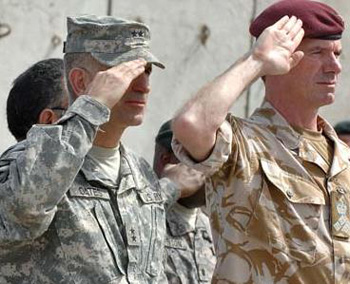 The British Naval and Military salutes, respectively. No, that's not a typo. Yes, we know that is a US general. See below for details.
Advertisement:

The Military Salute is a long-standing tradition of military forces around the world, and it is obviously the most visible and known gesture of military protocol to the average civilian. There is an urban myth that it evolved out of a custom in which mediaeval knights opened their visors with their weapon-hand to be recognised and to show that they were not armed; in fact it evolved from the former custom of men removing their hats as a sign of respect. This is the reason that in some military outfits (such as the US Marine Corps and Navy) it is incorrect to salute when you are not wearing a "cover". (In other outfits customs are different, and salutes are given when bare-headed; meanwhile, in many armies, including the Russian one, it is expressly forbidden to salute without a hat on) The salute evolved because of the introduction of headwear that could no longer be taken off easily with just one hand, especially bearskin caps and mitre-shaped grenadier caps. In the 18th century, when the military salute was first introduced, there were situations when it was still possible to give it with the left hand, e.g. on parade when the saluting officer was holding a spontoon in his right hand.

Different armies in the world have different small details that distinguish their salutes (as can be seen in the picture above), but most of them still follow a certain pattern: the arm is lifted up perpendicular to the side of the body and bent at the elbow, forming an angle around 30 degrees, the hand is open straight with fingers joined, and the fingers touch the temple (or the lip of the visor when with headgear). The salute is dropped by lowering the hand back to the side of the body.

In the English speaking world, which here means the US and the commonwealth there are two types of salutes. The first, with palm facing outwards, is the "British military salute." This is used by the armies and air forces of most Commonwealth countries. Its origins are with the British Army. The other which is palm downwards, originating with the Royal Navy, is the British "Naval" salute (this was originally introduced because sailors' and officers' hands were often stained with tar through life aboard ship, and showing a dirty palm was considered to reduce the dignity of the gesture). This is used by the Naval forces of the Commonwealth and the US Armed Forces. This is often in popular parlance seen as an American salute, even in the commonwealth. There has been examples of nitpickers and scolds attacking works (or real life) where British or Australians are depicted as saluting palm downwards as an example of Eagleland Osmosis.

Additionally, there are several oddball types of salutes that are given in various situations, mainly where there is something impractical about rendering a normal salute with your hand. These include:

Salutes are usually rendered by an officer (of equal or lesser rank than the salutee) or enlisted soldier to an officer of equal or higher rank. The officer, while not necessarily obligated to return the salute, almost universally does. Not returning the salute is a serious show of disrespect and condescension, which reflects poorly on the salutee. This also has another interesting effect: initiating a salute towards an officer of lesser rank or an enlisted soldier, while not considered insulting (generally), is considered weird and out of place. In the United States armed forces and the armed forces of those countries which award the Victoria Cross, there is one exception to this rule: if you are a recipient of the Medal Of Honor or the Victoria Cross, you WILL be saluted by any member of the armed forces, regardless of rank. So yes, this means that badassery is worthy of saluting.

Saluting is Serious Business for any member of the armed forces, and its misuse or improper execution are considered a serious faux pas at best and a serious insult at worst. If you're a soldier and you render an improper salute, expect a small lecture on proper execution and a SEVERE butt-chewing if you're lucky. Worst-case scenario, you can even be taken for disciplinary action and get hit where it really hurts: your paycheck. As mentioned above, the salute is a sign of respect, so any kind of corruption, change or mockery in the salute reflects very poorly on the saluter.

Also, a very important characteristic of the salute is that it is a privilege, not a right. While civilians may salute as a sign of respect for a soldier, this is more about soldiers gracefully accepting gratitude than the civilian actually being acknowledged in fellowship. In fact, military prisoners convicted of a crime must not salute: since the salute, as mentioned above, is an expression of fellowship, saluting someone while being imprisoned is akin to saying the salutee is as much of a criminal as the saluter, which can end in a WORLD of shit for the saluter. However, enemy prisoners of war CAN be saluted according to their rank, and it is seen as a sign of respect and fairness for a soldier of the imprisoning army to salute the imprisoned officer.

There are also situations in which saluting is NOT recommended. When in the field or in a forward operation base, soldiers are instructed not to salute, since it identifies the officer/VIP, which can provide a sniper with an easy target. Most forces allow people operating vehicles to refrain from doing so if it would be unsafe to take their hand off the controls. Many forces find it inappropriate to salute when not in uniform; for example, in the US Navy if you are out of uniform you simply stand at attention instead of saluting in situations that normally call for it.

The hand salute is also used in various situations and towards people of importance to the military. These include:

There is also a difference between a standard or "administrative" salute used day-to-day, and a "funeral salute" used only at funerals. A regular salute is a quick motion: the saluting hand snaps up, holds until the salute is returned, then snaps back down. In a funeral salute, the saluting hand comes up in a slow, deliberate (three-second) motion, and comes down the same way. The funeral salute is used only when specifically saluting the dead man being buried. An officer attending the funeral will still receive a standard salute. Occasionally you will see slow salutes during a flag-passing ceremony as part of a retirement to indicate respect for the flag and the person who is retiring. Suffice it to say, using a slow salute for any other purpose is downright offensive.

Interesting dynamics can happen in fiction with the salute, including:

Examples of the salute happening in fiction would probably feature pretty much every series on the entire site, so please limit examples to when the salute is a dramatically powerful or distinctive moment.