Fanfic / The Road Not Taken 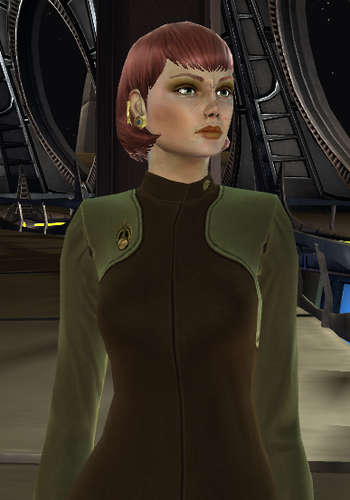 "Station Security. Drop it or I drop you."
SSgt. Morai: So we’re still not sure, Captain Kanril. Lieutenant Zara thinks the problem’s in the interface connections, Kora Lorn thinks it’s an EPS issue, and Captain Kurland is starting to think it’s a case of PEBCAC.
Capt. Kanril Eleya: ‘PEBCAC’?
Morai: “Problem exists between console and chair”.
Advertisement:

"The Road Not Taken"

. It is an Alternate Universe Fic of the Bait and Switch continuity.

In a What If? scenario positing that Kanril Eleya never transferred into Starfleet from the Bajoran Militia, in 2409 she now holds the rank of captain and is security chief for Deep Space 9, which is setting up for a major international summit seeking to form a multilateral force to combat the Borg. The proceedings are interrupted by the sudden appearance of a massive fleet of Jem'Hadar warships, and Eleya must fight her way to safety with the diplomats.

The story features a cameo appearance by Morgaiah t'Thavrau, acting as the Romulan representative to the conference, and partially adapts the Cryptic mission "Second Wave"