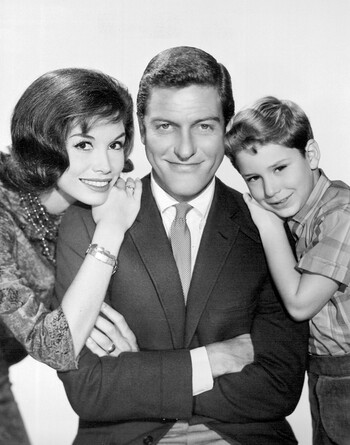 The Dick Van Dyke Show was a classic and influential Sitcom that aired on CBS from 1961–66.

This was the first sitcom to focus as much, if not more, on the main character's work life as his home life, influencing later Work Coms such as The Mary Tyler Moore Show, The Bob Newhart Show and NewsRadio, and its behind-the-scenes depiction of the world of television anticipated the likes of The Larry Sanders Show and 30 Rock. As head writer for the fictional comedy/variety series The Alan Brady Show, Rob spent much of his time in the office bantering with fellow writers Buddy Sorrell (Morey Amsterdam) and Sally Rogers (Rose Marie). Sally was an unusual female character for the era, in that she was both a working professional (who was something other than a teacher or nurse) and single (although she was portrayed as man-hungry and desperate to end her spinsterhood). Rounding out the ensemble was Mel Cooley (Richard Deacon), the bespectacled, bald-pated, uptight show producer and sycophantic brother-in-law to Alan Brady. The egotistical Brady, played by Carl Reiner himself, was rarely seen and actually served as The Faceless and/or The Voice in the show's early seasons.

This series is also notable as one of the first mainstream shows to feature, albeit in a bit part, middle-class African-American characters in a non-servile role. In the third-season flashback episode "That's My Boy??", Rob tells of wondering if his infant son belonged to his family due to paperwork confusion with another family at the hospital. Finally, the other family, the Peterses, come to straighten things out, and to one of the longest laughs from a studio audience ever, they are revealed to be an African-American couple played by Greg Morris and Mimi Dillard. A small role, yes, but groundbreaking at the time. A later episode ("The Man From My Uncle") guest stars Godfrey Cambridge as a G-Man.

Though the show stayed away from Jive Turkey territory as much as possible, Kennedy era reflections abound, including Laura as a Jackie O. surrogate; the Mafia, via the imposing Big Max Calvada (executive producer Sheldon Leonard); The British Invasion ("The Redcoats are Coming"); a self-indulgent Hugh Hefner surrogate; Carl Reiner as a Jackson Pollock-like abstract painter; or Rob and Laura's praise for baby guru Dr. Spock.

Alternative Title(s): Head Of The Family