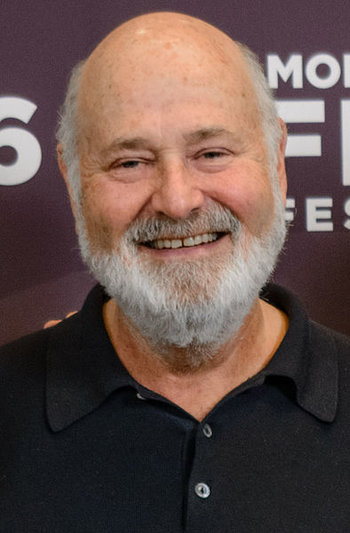 He made sure to get out of the cockadoodie car.
Advertisement:

Reiner was born to a show business family: his mother Estelle Reiner was an actress and singer and his father was Carl Reiner, the famous writer, actor, and director. Reiner rose to sudden fame when he played the role of Mike "Meathead" Stivic on the 1970s smash hit sitcom All in the Family. In 1984, several years removed from All in the Family, Reiner directed and co-wrote the Mockumentary This is Spın̈al Tap, which was only a modest success at the time but has gone down as an all-time classic, as well as the Trope Maker for the Mockumentary genre.

This Is Spinal Tap launched Reiner on a ten-year run of phenomenal success that few Hollywood directors have ever equaled. From 1984 to 1993 Reiner directed Spinal Tap, The Sure Thing, Stand By Me, The Princess Bride, When Harry Met Sally, Misery, and A Few Good Men, and all of which made money and showered Reiner with critical accolades. Then came the disastrous failure North, which drew one of Roger Ebert's most famous reviews ever ("I hated this movie. Hated, hated, hated, hated, hated this movie. Hated it.") and seemed to permanently knock Reiner off course. Reiner temporarily rebounded with The American President but never again enjoyed the sustained success that he did in his first decade as a director. He has kept working, however, still directing films in The New '10s, while occasionally acting in television and in films such as The Wolf of Wall Street.