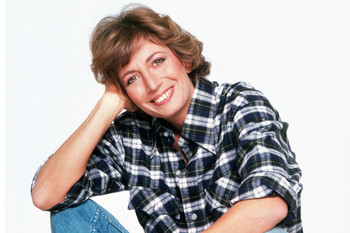 "I do feel it's important to entertain people. I try to."
Advertisement:

Carole Penny Marshall (October 15, 1943 - December 17, 2018) was an American actress, director, and producer who helped pave the way for many other female film directors in the years to come.

The younger sister of director/producer/actor Garry Marshall, she got her first big break on The Odd Couple (1970) (which Garry was a producer of) as Oscar's secretary Myrna Turner. Two years after leaving the show, she and Cindy Williams made a five-episode run on Happy Days (again, a show produced by Garry) which proved to be successful enough to get them their own spin-off show...but not without its own problems behind the scenes. Still, the show lasted for eight seasons and earned Marshall three Golden Globe nominations.

During her time on Laverne and Shirley, Marshall became interested in directing. She made her directing debut with the episode "Squiggy in Love", and directed three later episodes of Laverne and Shirley. Her feature film debut as a director came in 1986 with Jumpin' Jack Flash but she would have even better success two years later with the Tom Hanks-starring vehicle Big, which would become the first female-directed movie to gross over $100 million at the U.S. box office.

In the following years, Marshall would alternate between directing and acting in both film and TV. She died on December 17, 2018, at the age of 75 due to complications from diabetes.

From 1971 to 1981, Marshall was married to fellow director/actor Rob Reiner.