Film / Stand by Me 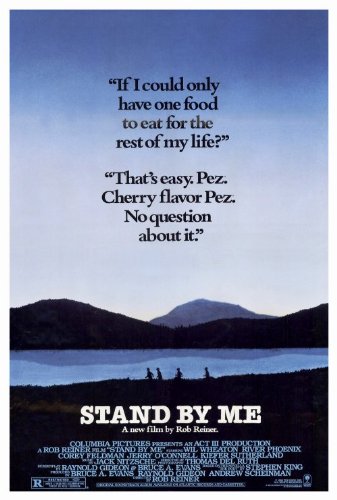 No I won't be afraid, oh I won't be afraid
Just as long as you stand, stand by me
"I never had any friends later on like the ones I had when I was twelve. Jesus, does anyone?"
— The Writer, finishing off his novel
Advertisement:

Stand by Me is a 1986 Coming of Age film directed by Rob Reiner, based on the novella The Body from the collection Different Seasons by Stephen King. Set in fictional Castle Rock, Oregon (Maine in the original story) in 1959, the film is told through the recollections of its main character, Gordie Lachance, who's now a freelance writer.

The twelve-year-old Gordie (Wil Wheaton) and his friends Chris Chambers (River Phoenix), Teddy Duchamp (Corey Feldman), and Vern Tessio (Jerry O'Connell) journey into the woods near their home to look for the body of a boy named Ray Brower, who was struck by a train while picking berries. Through the boys' misadventures and conversations, the viewer learns about each character's personality. Each of the boys, for varying reasons, live in the shadow of their fathers and older brothers. Gordie's talent for storytelling (as illustrated by his improvised short story 'The Revenge of Lard-Ass Hogan') pegs him as the most likely of the four to have a promising future.

The film contrasts the four main characters, who are depicted as well-meaning and relatively virtuous, with a gang of bullies called the 'Cobras', who are led by local hood 'Ace' Merrill (Kiefer Sutherland).

The incredible All-Star Cast featured, in addition to all of the above, John Cusack as Gordie's older brother and Richard Dreyfuss as adult Gordie (aka "The Writer") in the Framing Device.

See 1995's Now and Then for basically the girl version, and 1993's The Sandlot for a sanitized, sports-centric version.

Stand by Me provides examples of the following tropes: