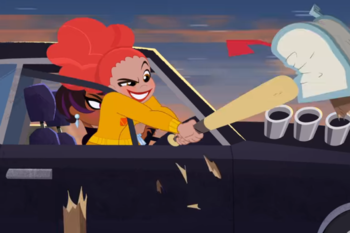 Homerun!
It's [Jimmy's] turn up to bat. He is excited and his hands are sweaty from the nerves. [His friends] round the corner and pick up speed. Jimmy swings and his bat cracks against a mailbox. It clangs to the ground. Junk mail flutters across the yard like snow. Jimmy feels naughty, but everyone else is laughing, so he laughs, too.
—Jimmy's Low-Level Goon empathy text, Jimmy and the Pulsating Mass
Advertisement:

Mailbox baseball, also known as mailboxing, is the act of hanging out the passenger side of a car, usually with a bat, and hitting roadside mailboxes while another person is driving.

This action exists both in and out of fictional media, being used in works to depict characters, usually teenage or young adolescents as delinquents who have little or no respect or regard for other people or the law. However, some repeat victims start to get wise and look for ways to protect their mailboxes, usually by reinforcement through steel or concrete additions, as revenge against the people who keep wrecking their property. This often ends badly for the practitioners, whether through broken bats or even broken hands, wrists, or arms.

Note that, in the United States at least, any crimes against mailboxes and the mail inside them are considered a federal offense, as they are protected by federal law. Punishments typically include fines or even jail time, so Don't Try This at Home.

This has become a Discredited Trope in some countries (like Canada) due to their governments phasing out personal home mailboxes in favor of the reinforced safe-like mailboxes set up at specific neighborhoods, where recipients gather their mail in one location, which among other things, is to prevent such stunts like mailbox vandalism from happening in the first place. As such, you'll rarely see this trope ever played straight in media set in those countries nowadays. Likewise, this trope is unlikely to show up in media set in countries where roadside mailboxes are uncommon. note In many European countries for example, mail is delivered through a slot in your front door or more rarely through one in your wall or gate into an internal secure box that can't be reached from the outside. There are external mailboxes, but these are generally mounted to walls and not reachable from the road.