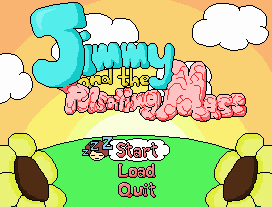 It's too early to say goodnight~
The sun is out, it's day outside~

It's too early to say goodnight~
Advertisement:

Jimmy and the Pulsating Mass

is an Earthbound-inspired RPG for PC by Kasey Ozymy, a.k.a Housekeeping. The game uses RPG Maker VX Ace as its engine, but has an entirely original soundtrack and artwork.

You play as Jimmy, a boy who dreams of a wide variety of fantastical things. He is joined by his brother Buck, his mother Helga, his father Andrew, and his uncle Lars. One day, Jimmy is tasked to go to the Beehive in Giant Garden to get some honey so Helga can make his favorite cake. So Jimmy sets out to get it.

But on his way, he runs into the Petty Thugs, who are terrorizing the citizens. After fighting them off, he learns that they were employed by a monstrous alien entity, the Pulsating Mass, who despises Jimmy and desires to destroy the dream world. Soon, Jimmy and his family are kidnapped and separated, and Jimmy must traverse the continents of the world to reunite with them and defeat the Pulsating Mass.

It was released on Steam on 7th August, 2018 as a commercial game, but there is a demo here