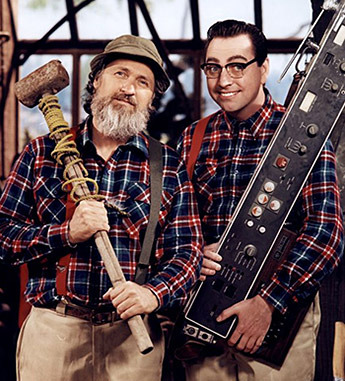 Red and Harold, ready to film another action-packed episode.
If the women don't find you handsome, they should at least find you handy.
— Red Green
Advertisement:

A Sketch Comedy show produced by and starring Canadian comic Steve Smith, centered around the members of Possum Lodge, a backwoods hunting camp somewhere in Northern Ontario. It loosely parodies "outdoor" TV shows generally, and the iconic Red Fisher Show (which ran in Canada from 1968 to 1989) in particular. It ran for 15 seasons and exactly 300 episodes, from January 4, 1991 until April 7, 2006.

The show is hosted by the President of the lodge, philosopher, handyman, outdoorsman, and basically very average man Red Green (Smith), with technical direction provided by his painfully geeky nephew Harold (Patrick McKenna).

Episodes are usually framed by Red and Harold discussing some activity or event affecting the lodge or its members. This most often involves a wild scheme either to raise money or clean up some kind of environmental disaster before the authorities clamp down. Or, not infrequently, both. Red's updates — and the resulting arguments with Harold — are intercut throughout the show with various scenes of Red talking to lodge members about said issue.

Advertisement:
"Well, I'm not gonna be calling the U.S. Air Force, Harold. What do I say? We've got a missile? They take that as a threat, we're in real trouble."
"Well, then, contact the Canadian Air Force."
"Harold, it's after six; he's gone home."
— Typical exchange between Red and Harold

"I'm a man, but I can change, if I have to, I guess."
— The Man's Prayer (Opening recitation of Men Anonymous)

Meanwhile they also carry on with the Show Within a Show that Red and Harold are producing, a local cable-access version of the standard Saturday-afternoon outdoor program. Various topics are touched on, but the actual quality of the information tends to be...well, the most elaborate segment is "Handyman's Corner", wherein Red somehow turns a simple DIY repair or project into a huge, awkward, Goldbergian task with the help of the "handyman's secret weapon", duct tape. And lots of it.

Another popular segment is "Adventures with Bill", featuring the title character's attempts (or more accurately, spectacular failures) to get a grip on the whole outdoorsman gig, in slapstick pantomime shown in black and white and narrated by Red. "The Possum Lodge Word Game" is a typically loose attempt at a Password-esque game show, with Red and Harold trying to get a lodge member to say a certain word for a prize.

Culture is not unknown here at the Lodge, either — it may be gravely wounded, but it sure isn't being ignored. Red is often seen in short transitional vignettes playing guitar and singing (accompanied by Harold on spoons or homemade drum), or reciting poetry. Occasionally he simply addresses his fellow middle-aged schlubs directly and rather poignantly, concluding with "Remember, I'm pulling for ya, we're all in this together."

The show always ends with the sounds of the lodge meeting beginning, in the basement. Red stays upstairs for a moment to deliver a quasi-Aesop and a message to his wife, Bernice.

Often the opening of the lodge meeting will run behind the closing credits, with the studio audience as the lodge members.

"And to the rest of you, thanks for watching. On behalf of myself and Harold and the whole gang up here at Possum Lodge, keep your stick on the ice."
— Red's closing line in every show.

Although the show officially ended in 2006, Steve Smith reprised his role as Red every few years in stand-up comedy tours until 2019. On some tours his bits (framed as him leading a Lodge meeting) are interspersed with pre-recorded cameos from the rest of the cast discussing a sort of B-plot, such as Harold wrecking the Possum Van and the ensuing efforts to dislodge it from a tree, making them something of continuations of the show.

. It was also released in whole on DVD.

. The podcast features sketches reminiscent of the original TV series, and core cast members like Peter Keleghan and Patrick McKenna reprise their characters. Several new characters also appear, while characters like Junior Singleton and Moose Thompson who were previously The Ghost are Suddenly Voiced.

Also has a movie, Duct Tape Forever released in 2002 and focused on Red trying to save the lodge after his antics land him in hot water with the town and threaten to have the place destroyed.

open/close all folders
A-D
E-H
I-L
M-P
Q-T
Harold: "Well how are you going to do a show without talent? You can't do a show in front of the camera without talent.
Red: *shrugs* "We have for years."
Harold: "Did I say can't? I meant shouldn't."
U-Z
"Keep your stick on the ice".
Feedback

In the New Year's special, Red attempts a lighting project that spells out "Toast Yourself At New Years Eve". Unfortunately, a short causes some of the lights blow out, resulting in it saying something more insulting.

Example of:
Signs of Disrepair

In the New Year's special, Red attempts a lighting project that spells out "Toast Yourself At New Years Eve". Unfortunately, a short causes some of the lights blow out, resulting in it saying something more insulting.