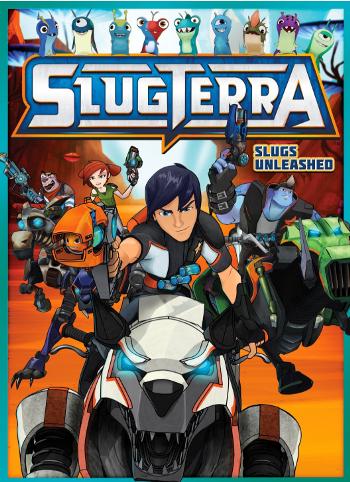 This show is brought to you by the Stealth Pun of guns that shoot literal live slugs.
"Slug it out!"
— Series tagline
Advertisement:

Miles beneath the surface of the earth exists a sprawling underground world called Slugterra, named for the tiny creatures known as Slugs that populate its innumerable caverns. Many of the people who inhabit this subterranean land are gunslingers, but they don't use bullets or gunpowder. Instead, the people of Slugterra use the slugs themselves as ammo, the power and speed of their shots transforming the harmless slugs into powerful monsters with all kinds of different abilities and utilities.

For generations, the men of the Shane family have come down from the surface world to act as the guardians of Slugterra, its existence known only to them and no one else. But when Will Shane mysteriously disappears following a battle with the villainous Dr. Blakk, Slugterra is left without a protector. However, in the last moments before his disappearance, Will sent out one of his slugs, a fiery little critter named Burpy, to his young son Eli on the surface (its existence itself a legend to the people of Slugterra) to deliver the message telling him he will be the next guardian.

A few years later, honoring a deal he made with his father to wait until his fifteenth birthday, Eli Shane journeys down to Slugterra to follow in his father's footsteps and become protector of this strange new world. Since his only knowledge of Slugterra comes from his dad's letters, Eli quickly makes some new friends and fellow slug-slingers to help him in traversing and protecting Slugterra: a proud Molenoid and (self-proclaimed) master tracker named Pronto, a camera-wielding aspiring documentarian named Trixie, and a strong cave troll mechanic named Kord. Together, the four members of the Shane Gang travel across the caves of Slugterra and act as protectors of the people, discovering its many secrets and battling the forces of Dr. Blakk, who has created corrupted slugs called ghouls that he intends on using for his plans to dominate all of Slugterra.

A new spin on the Mons concept with quite the twist, Sugterra is a Canadian-produced animated action/adventure series that debuted on September 3, 2012 on Family CHRGD (now WildBrainTV) as the channel's first original series. It is produced by Nerd Corps Entertainment, the Vancouver animation studio previously known Dragon Booster, Storm Hawks, League of Super Evil, Hot Wheels: Battle Force 5, and Rated "A" for Awesome. Sharing the unique in-house style of CGI animation that defines the studio's original shows, it was shown stateside on Disney XD (making it Disney XD's second import from Nerd Corps after Rated "A" for Awesome). The show ran for 6 seasons and 63 episodes, concluding its run on October 25 2016 and making it Nerd Corps' longest running series. Additionally, it also received four movies, tropes for which should go to their place at the bottom of this page.

Check out the official site here

Now has a character sheet which is currently under construction.

Tropes appearing in the show:

Tropes appearing in Ghoul From Beyond

Tropes appearing in Return Of The Elementals