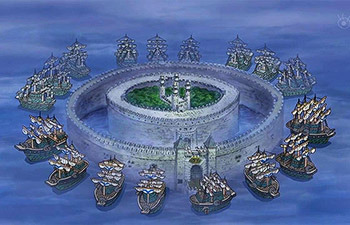 Maybe you can get out on good behavior.
"In 1988, the crime rate in the United States rises four hundred percent. The once-great city of New York becomes the one maximum security prison for the entire country. A fifty-foot containment wall is erected along the New Jersey shoreline, across the Harlem River, and down along the Brooklyn shoreline. It completely surrounds Manhattan Island. All bridges and waterways are mined. The United States Police Force, like an army, is encamped around the island. There are no guards inside the prison, only prisoners and the worlds they have made. The rules are simple: Once you go in, you don't come out."
— Escape from New York
Advertisement:

Greetings, convicts. Welcome to The Alcatraz. Around here, we like to call this place "The Rock". I'm sure you've heard of this place. We're on an island surrounded by boiling acid that just happens to be infested with sharks. There are guard towers every twenty feet and there are more Mooks here than you've had warm meals. The only way on or off this miserable spit of land is a narrow bridge, with explosives wired to it so we can destroy it at a moment's notice. We've got a perfect record here, and we're not going to lose it. So don't think about trying to escape, you miserable swine, you're likely to end up a blackened skull. There's no hope for any of you.

Well, except for you, Mr. Protagonist and your Ragtag Bunch of Misfits. I'm sure a combination of blind luck, poorly guarded air vents, the stupidity of my own men, and Deus Ex Machinas will be enough to ensure that you escape and continue on your quest. It's almost inevitable, whether you're breaking a loved one out or just escaping yourself. No one's ever escaped from here before, so of course you'll be the ones to pull it off. So enjoy your time here, you scum. God knows you won't be here long. Now, guards! Take them to their cells, and let them rot!

What? Who says we're Tempting Fate? What - oh, all right, there was one guy years ago, but he became a Living Legend for escaping, and we've tripled the security since. You ain't half the man he was, and on top of that, no one ever saw that guy again. All he escaped into was Hell! (Evil Laugh)

Oh, and just so you scum know — this ain't your daddy's Cardboard Prison. Folks have been breaking out of that one for years now. Sometimes we make special precautions for a particularly bad prisoner: a Tailor-Made Prison that takes advantage of an Achilles' Heel you super freaks have or a Room 101 whenever prisoners need Cold-Blooded Torture or a Fate Worse than Death in order to behave. We can be really nasty if we want to be. Ain't no one gonna remember you now. Might as well go to a happy place now, scum.