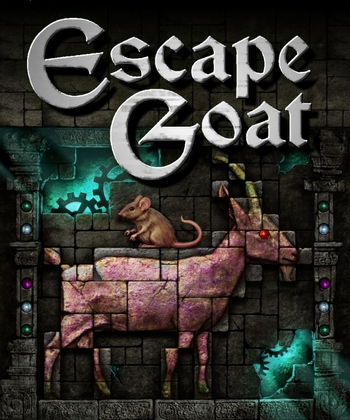 Escape Goat is a puzzle video game developed by MagicalTimeBean for the PC and Xbox 360.

The main character is a purple goat accused of witchcraft, who is punished for his crimes by being sent to the Prison of Agnus, filled with platformer puzzles. Along the way, he not only gains a mouse companion to help trigger switches (and switch places with when the right power-up is obtained), but also comes across sheep asking for help in finding their siblings. Only seven of the nine areas (each with one sheep) need to be cleared in order to leave the prison, but the goat's escape might not be quite as easy as it seems...

The game later made its way to Steam, and now has a sequel, Escape Goat 2.