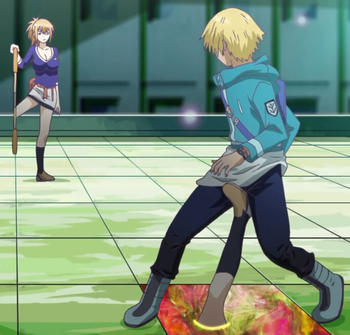 This is when any device or process (technological or magic) with the effect of teleportation is used as a weapon against a target, either offensively or defensively, usually in a combat situation, or functions like a weapon in order to deploy a teleportation device for escape or another tactical advantage.

Defensive use: usually deposits the target elsewhere, incapacitating them by virtue of the target's being unable to participate in combat with the user. Can be used for Banishing Ritual, depending on where the target is warped into.

Offensive use: teleports a victim into the vacuum of space, inside solid rock, a fire, underwater, the "Blender Dimension", or any other hostile environment where death is certain. Or simply beaming them out and never bothering to reassemble their molecules, effectively vaporizing the target. An alternative is an internalized Tele-Frag, which teleports something into the target, usually with hideous results. There's also the partial teleportation, a combination of the Defensive use with Portal Cut, where only part of the target is teleported away. With portals (whether as a superpower or device/weapon), someone can warp their attacks (usually a ranged one, but a melee attack out of a portal is not unheard of) so that they can hit their target more effectively (including from unexpected directions or inside its defenses).

Teleport Interdiction is a good defense against this.

Sub-Trope of Teleportation. Supertrope to Teleport Gun, sometimes Tele-Frag and Dimensional Cutter if used on purpose rather than accidentally, and Fighting Across Time and Space if multiple locations are visited in a teleportation-based action scene. Appropriate examples should go to subtrope pages.

Breach has the power to create portals to anywhere she wishes, and makes use of it to attack her enemies from every direction.

Example of:
Thinking Up Portals

Breach has the power to create portals to anywhere she wishes, and makes use of it to attack her enemies from every direction.