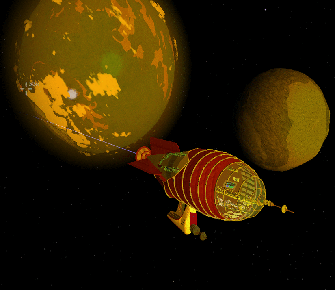 In space, no one can hear you dream.
"Welcome, traveller!"
— Haxus
Advertisement:

A veteran space sim and Genre Mashup, Shores of Hazeron sends you out upon a galaxy of hazards, where you can expect to experience not only death by pirate, death by decompression, death by black hole and death by parasitic chest-burster (implanted by another player), but also death by walking too quickly into a sailboat, all in delicious first person.

Core gameplay involves nurturing a city from nothingness into the Space Age, designing, improving and battling unique spacecraft, and spreading your civilization throughout the stars, whether alone or as part of a great, massively multiplayer nation. From rooms to buildings, buildings to cities, cities to planets and planets to star systems, the transition is fluid and seamless.

Though the game shares ideas with the late 2010s space sim generation, such as Star Citizen, Elite Dangerous, StarMade or Dual Universe, it is actually of the same vintage as Noctis, displaying both the high ambition and the low gloss of that era. Developed by Software Engineering and overseen by the mysterious architect Haxus.

The game entered open beta around 2010. It used to be free-to-play; then it died and was resurrected by popular protest in February 2015 on a pay-to-play model. In August 2020 it returned to the free-to-play model for a short time with a voluntary Patreon for funding, before it was eventually shut down for good in January 2021. An identical single-player version is expected to release shortly, renamed Hazeron Starship.

Shores of Hazeron contains examples of the following tropes: