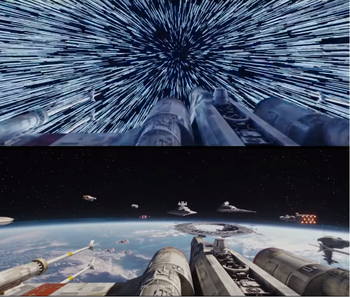 In effect, the inverse of Hyperspeed Escape. Instead of using hyperspeed to escape a bad situation, you use it to cause a bad situation by jumping into the immediate vicinity of your target to take them by surprise. Alternately, you can just lie in wait where you know the enemy will exit hyperspace, and pounce on him before he has time to react. Immediately departing the area as soon as the attack is concluded is fairly common for the jumping-in-to-attack variant, but optional for the defensive lying-in-wait variant.

Unorthodox use of Faster Than Light travel in combat is fairly common in military science fiction literature, particularly justified in a setting where Hyperspace Is a Scary Place and therefore most people in the universe are unwilling to push the possible uses of FTL to the limits. For example, a ship might use tactical hyperspace jumps to jump into and out of hyperspace over relatively short distances and short periods of time to make themselves harder to hit or otherwise throw off the enemy, when conventional wisdom would suggest that such a tactic is far too risky to be possible, usually due to the risk of a ship falling afoul of a Tele-Frag with a planet or other celestial body. After all, traveling through hyperspace ain't like dusting crops.

The actual applicability of this trope is limited to settings or situations where at least one of the parties involved cannot detect other ships that are traveling FTL, either because they are limited to light-speed sensors, or because their sensors cannot penetrate into whatever other dimension is used for FTL.