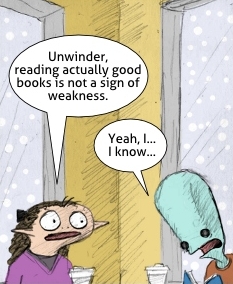 "I am just a weak-minded child trying to survive in a culture where the highest thing a person can aspire to is knowing a lot about music."
— Unwinder, a possibly non-canon, but still pretty accurate, self-assessment
Advertisement:

is a metafictional Magic Realism Slice of Life webcomic by Wilson "Eli" Parker, also known as the creator of Powerup Comics. The comic is a satire of modern youth culture—particularly the oversaturation of trivialities and entertainment—and an Affectionate Parody of suburban Minnesota.

At the heart of the comic is Unwinder, a kid who's clearly a little too Genre Savvy for his own good: wildly inventive, yet completely incapable of recognizing the fine line between creativity and idiocy. He thinks rock bands should play pranks on the audience instead of music. He consumes entertainment solely so he can reference it in his conversations. He sends unsolicited scripts for TV ads to Taco Bell. He invents internet memes, then invents webcomics solely to spread these memes. He is, in short, a product of the Information Age Gone Horribly Right.

Rounding out the central cast are Unwinder's eternally cheerful girlfriend, Mildred; his friend and punching bag, Barbecue Sauce; and the Only Sane Man, Horse-Man.

There is no overarching plot, though the humor is becoming increasingly dependent on continuity. The comic updates irregularly, usually on Saturdays.

It also features what may possibly be the most accurate examination of TV Tropes, ever