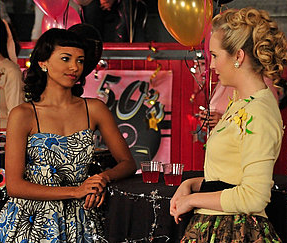 "The party is '90s-themed, so we're dressing the way we did back then, AKA hella fresh."
— Jake Peralta, Brooklyn Nine-Nine, "The Tattler"
Advertisement:

A common staple in fiction and in Real Life. There are always parties which are centered around certain decades which remain firmly in the minds of people (who may or may have not lived such decades) and popular culture. Such parties are usually based around music, fashion, dance styles and/or movies of a decade. The most popular ones tend to be The Roaring '20s, The '50s and The '80s. The '60s and The '70s are also popular choices, primarily during The '90s and The Oughties respectively, with these decades being irony fodder.

This celebration of the past might come from the use of a Nostalgia Filter. As people grow older, they start to miss their youthful days, where things seemed a lot simpler and, well, fun. Hence why these parties are usually organized. Nostalgia is connected to the need of escapism and the need of reminding what you've left behind, from things like clothes to old friends. However, people also tend to celebrate decades they barely or even haven't lived through just because the fashion seems more appealing or glamorous.