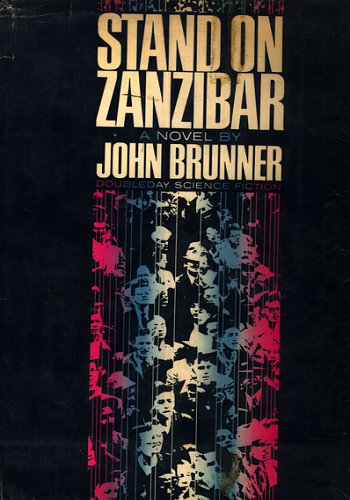 Stand on Zanzibar is a Hugo Award-winning dystopian novel by John Brunner, often considered one of the best works to come out of the New Wave Science Fiction movement of the 1960s.
Advertisement:

It's set in the year 2010, when the population of Earth has reached 7 billion. The Soviet Union is defunct as a superpower, but China is rapidly industrializing and increasing in power. Giant corporations have large enough economies to control entire countries. In-vitro fertilization and genetic mapping are becoming a reality. A computer the size of a large book is more powerful than the most massive supercomputers of the Sixties. Personalized digital avatars of yourself feature in everyday entertainment. Religious denominations are rapidly polarizing on moral issues like abortion. And ordinary people suddenly snap and go on killing sprees in schools, workplaces, and malls.

Sound familiar? Did we mention this book was written in 1968?

On the other hand, New York is encased in a giant dome, Puerto Rico and part of the Philippines are U.S. states, eugenics legislation has passed in 48 states, and the West has cured its addiction to oil.

Stand on Zanzibar isn't your ordinary dystopian novel; the plot is secondary to an intense worldbuilding experience and exploring the many consequences of overpopulation. The chapters alternate between:

SCANALYZER (all rights reserved) has prepared the following trope examples.