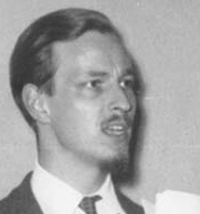 John Kilian Houston Brunner (24 September 1934 — 26 August 1995) was a British science fiction writer usually associated with the New Wave Science Fiction movement. His best-known novels include Stand on Zanzibar (which won a Hugo Award), The Shockwave Rider (a forerunner of Cyberpunk that predicted many aspects of the internet), The Sheep Look Up, Jagged Orbit, and The Squares of the City. Also notable is The Traveller in Black (later further expanded as The Compleat Traveller in Black), a collection of short stories.

Works by John Brunner that have their own trope pages include:

Other works by John Brunner provide examples of: