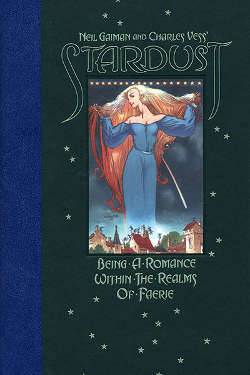 Stardust is a modern Fairy Tale written by Neil Gaiman. The main plot centers around Tristran Thorn, a young man with a mysterious ancestry who wants nothing more than to win the heart of his beloved Victoria. When he grandly declares that he'd even give her that star in the sky that just fell while they were watching the sky, she challenges him to do just that in return for anything he wants from her.

The fallen star turns out to be a girl named Yvaine, who isn't too keen on becoming Tristran's prize possession. The star's dislike of him becomes the least of Tristran's problems, however, as he learns that he isn't the only one who wants the star, and that some of them have far more malicious designs on her, all in the name of beauty, power, and/or fame. Needless to say, the road back home is quite a long and eventful one, and that's before the Reveals begin coming to light...

Stardust was originally published in four parts by DC Comics, lavishly illustrated by Charles Vess, before being collected into book form. It has also subsequently been published in a standard novel format without the illustrations.

If you're looking for the bizarre Golden Age superhero comic, go here.