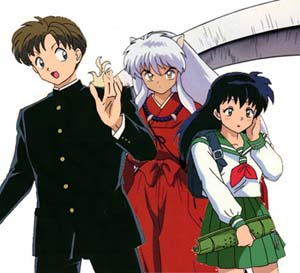 This trope is for any situation where a character (usually but not always The Protagonist) is placed in a Love Triangle situation where he or she must choose between rival suitors where one of the suitors has Magic and Powers, is non-human, or has some other property that places them firmly in the category of Speculative Fiction, and the other suitor is an ordinary person. Of course, the "magic" option need not use something called magic. In a Science Fiction setting, aliens, time travelers, visitors from another dimension or planet, or similar such characters qualify. In a Super Hero setting, anyone with superpowers would qualify.

When the character making the choices is a Muggle, such cases generally represent more than just a choice between persons, but often a Red Pill, Blue Pill kind of choice between living a normal life and living one that is exciting and exotic, but unfamiliar and often dangerous. Generally speaking, you can expect the character to go with the exotic Love Interest, because that is what allows for a more interesting storyline. However, sometimes it will be treated much the same way as a Rich Suitor, Poor Suitor plot, with the muggle picking an ordinary life of simple love over all the exotic things the non-muggle can offer them.

Sometimes the Magical option will have distinct disadvantages. We all know power comes at a price, and certain limitations may make it difficult for the protagonist to honestly desire a life with them. Maybe they can't be away from water. Maybe they have no physical presence, or have debilitating effects on those around them. Maybe the protagonist just finds the fact that they're not quite human unsettling. Whatever the issue, it makes the expression of love and lasting commitment a problem. The Muggle, on the other hand, is presumably a lovely person but with no such paranormal limitations. Suddenly they look a lot more enticing.

If the character making the choice is a non-muggle, one can almost invariably expect them to marry the Muggle, often in the face of resistance, prejudice and even taboos and prohibitions from their community of fellow fantastic beings.

By default, it involves Muggle–Mage Romance.

Compare to Betty and Veronica and Rich Suitor, Poor Suitor. Sometimes overlaps with Loves My Alter Ego and Two-Person Love Triangle; themselves subtropes of the Secret Identity.