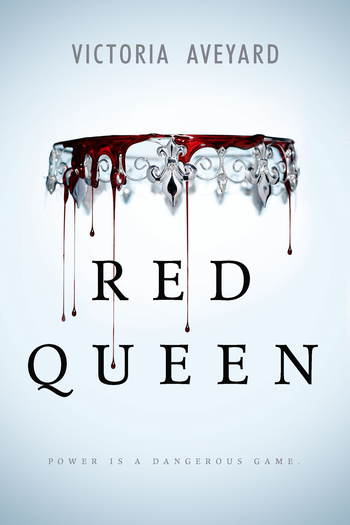 Rise, red as the dawn.
In school, we learned about the world before ours, about the angels and gods that lived in the sky, ruling the earth with kind and loving hands. Some say those are just stories, but I don't believe that.
The gods rule us still. They have come down from the stars. And they are no longer kind.
Advertisement:

Mare Barrow is a Red. This simple matter of blood color is what assigns her and millions of others to a life of poverty and hardship under the rule of Silvers. Unlike Reds, Silvers have silver blood, god-like superpowers, and authority over a Red's life. The only thing keeping Mare from surrendering to despair is her family and her close friend, Kilorn. There's also the hope of both of them becoming an apprentice, a Red's ticket into getting out of being drafted into the ongoing war. This small security changes for Kilorn in an instant when his master suddenly dies.

In an effort to keep him out of the war, Mare tries to get Kilorn smuggled out of her hometown. She meets a mysterious blonde woman named Farley, who offers to help them both in exchange for a lot of money that Mare doesn't have. Sneaking her way into a Silver city, she attempts to steal valuables from Silvers, but before she can even snatch a single trinket, an unscheduled broadcast airs. The footage shows a masked Farley claiming to be apart of an underground organization called the Scarlet Guard whose goal it is to overthrow their Silver rulers and usher in a new era of equality.

Chaos erupts in the city, leading Mare to go pick-pocketing at an inn outside of town. In her haste, she gets caught by a patron who identifies himself as Cal. Within minutes, Mare finds herself venting to Cal about her current situation. The next day, Mare is brought to the royal palace to work as a servant; it seems as though Cal took her words to heart, and pulled a few strings to get her the job there.

However, it isn't very long into her servitude that Mare finds out Cal isn't only a Silver, but the Prince and heir apparent himself. On top of this, an accident involving a electric shield reveals that she's got an ability of her own: the power to create and manipulate lightening.

In an effort to cover up the impossibility of a Red possessing any kind of superpower, the King forces Mare into the role of a lost Silver princess and has her become the fiancée to his youngest son, Maven. Additionally, her unique situation gives him the opportunity to use her as a mouthpiece for his own propaganda.

Later on, Mare meets up with Farley and agrees to play double agent for the Scarlet Guard. Between pretending to be something she inherently isn't and helping the rebellion, she also has to keep herself from falling for Cal, a well-meaning and kind boy who still wants to keep Reds under Silver rule, or Maven, a shy and helpful boy with dangerous secrets of his own.

And that's just the beginning: a war is brewing between the Reds and Silvers, with Mare situated within the eye of its storm.

The books included in this series are:

Queen Song and Steel Scars were also collected together in a novella called Cruel Crown (2016), which included an excerpt from Glass Sword.

In 2020, Victoria Aveyard and Soman Chainani (The School for Good and Evil) teamed up to create a two part graphic novel called Red School. The comic takes place after the events of the first novels for each series and is non-canon to both.

In 2021, a television series was confirmed to be in development

. It is set to be streamed on Peacock, with Aveyard as showrunner and both her and Beth Schwartz co-writing the pilot.