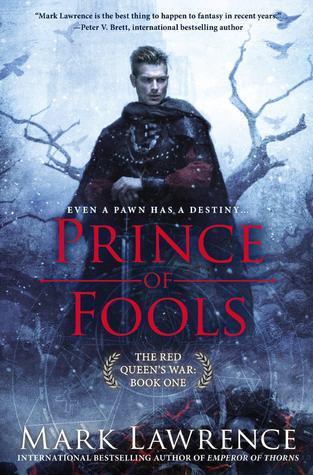 "Yes, I should grow up, and yes, I will, but there's time for that tomorrow. Today is for living."
"I'm a liar and a cheat and a coward, but I will never, ever let a friend down. Unless of course not letting them down requires honesty, fair play, or bravery."
— Jalan

The Red Queen's War is a fantasy trilogy by Mark Lawrence, the author of the Broken Empire Trilogy; the plots of both trilogies take place more or less concurrently.

The Red Queen's War consists of

Prince Jalan is tenth in line to the throne, and is content to gamble, womanize, and laze about without ambition or goals. He can also see the Silent Sister, a creepy old woman who serves as the invisible advisor to Jalan's grandmother, the Red Queen herself, although he likes to pretend the Silent Sister isn't there. Jalan likely would have continued to not amount to anything if he hadn't escaped a deadly trap set by the Silent Sister, with the result magically tying him to the Norse warrior Snorri.

Snorri is determined to rescue his wife and son in the north, and mistaking Jalan for an honorable sort, takes him along. Neither of them is happy about being magically bound to the other, and the farther they travel, the more things come to light about an army of the undead, and the state of the world, that Jalan can no longer safely ignore. The trap Jalan escaped has made both of them pieces in a much larger game.