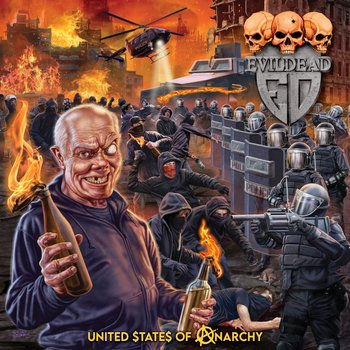 Join the anarchists today and get a free hoodie and DIY Molotov cocktail set!
Evey: All this riot and uproar, V... is this Anarchy? Is this the Land of Do-As-You-Please?
V: No. This is only the land of take-what-you-want. Anarchy means 'without leaders', not 'without order'. With anarchy comes an age of ordnung, of true order, which is to say voluntary order... this age of ordnung will begin when the mad and incoherent cycle of verwirrung that these bulletins reveal has run its course... This is not anarchy, Evey. This is chaos.
— V for Vendetta
Advertisement:

A virtually ubiquitous trope, both in fiction and Real Life, is the misconception that anarchists have no beliefs, that anarchy is chaos. While anarchy and chaos are not mutually exclusive (chaos is anarchic, although it often devolves into despotism, but anarchy is not necessarily chaotic) such an un-mindset is properly called nihilism, the belief in nothing. However, the actual definition of Anarchism is the belief that rulership should not exist (as indicated in its Greek roots, an- [no] -arkhos [ruler]). There is much division on the extent and nature of rulership, and what it means.

When used together with Chaos Is Evil, the result is likely to be Bomb-Throwing Anarchists.

This trope is rare/more likely to be averted in Spanish works since a substantial minority of the population formed an anarchist system during the Spanish Civil War. Some of them are still living and anarchist organizations are slightly more mainstream than in most countries. They are still a political minority, though.