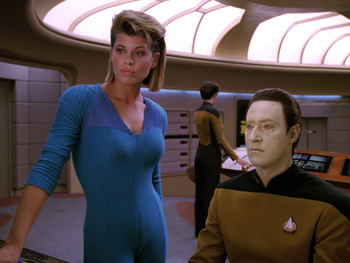 The crew enlist the help of Tasha Yar's sister, Ishara Yar. You get the feeling that whoever designed Seven Of Nine's outfit was watching this?
On a mission to rescue the crew of a severely damaged Federation freighter, the Enterprise travels to Turkana IV, where their deceased former security chief Tasha Yar was born. The government of the planet has collapsed, and society is in a state of anarchy, with rival armed gangs feuding and raiding each other's territory. When the Enterprise crew learns that one of the major factions has captured the freighter's crew and is holding them hostage, they decide to mount a rescue mission with the help of the other side, one of whose fighters is Ishara Yar, Tasha's sister.