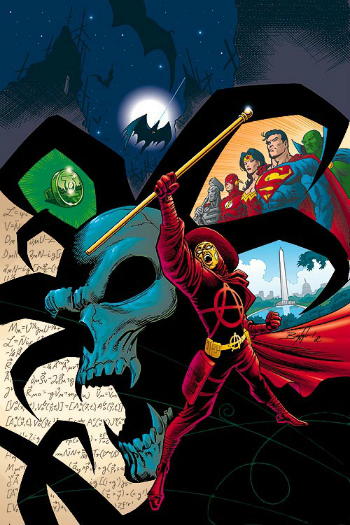 "His name is his goal!"
"I'm against anything that's against people! Cruelty — brutality — exploitation... These are the enemies of the people — The enemies of Anarky!"
— Anarky dialogue by Alan Grant, The Shadow of the Bat #17, October 1993.
Advertisement:

Anarky is a fictional character appearing in books published by DC Comics. Co-created by Alan Grant and Norm Breyfogle, he first appeared in Detective Comics #608 (November 1989), as an adversary of Batman. Introduced as Lonnie Machin, a child prodigy with knowledge of radical philosophy and driven to overthrow governments to improve social conditions, stories revolving around Anarky often focus on political and philosophical themes.

Originally, the character was portrayed with socialist, left-leaning views, but after Grant's own viewpoint shifted to reflect the influence of Frank R. Wallace's Neo-Tech philosophy, an offshoot of Ayn Rand's Objectivism, the character Anarky essentially shifted towards free market libertarianism. Which is funny if you consider that Rand did not like anarchism, and found the idea of combining anarchism with capitalism to be appalling. The feeling is mutual for anarchists (a communist philosophy), who despise libertarians and Rand.

Anarky is sometimes seen as an Expy of V from V for Vendetta, and that comic was seen on Anarky's bookshelf as a homage. Anarky is sometimes portrayed as a hero in his own right, just with an approach that drastically differs from Batman's, while some portrayals, such as the animated series Beware the Batman, depict him as a villain. None the less, some critics had favorable responses to the original series' political/philosophical approach, with Roderick Long, an anarchist/libertarian political commentator and Senior Scholar at the Ludwig von Mises Institute, calling the comics "an impressive voice for liberty in today's comics". Conversely, Long criticized comics which depicted Anarky as a villain, stating that the original depiction of the character was much more interesting and casting Anarky as a villain made him less interesting.

An Anarky was introduced to New 52 in the Green Lantern Corps Batman: Zero Year crossover issue. The New 52 Lonnie Machen made his debut in the Detective Comics story arc "Anarky". Although he's not the Anarky in that story.