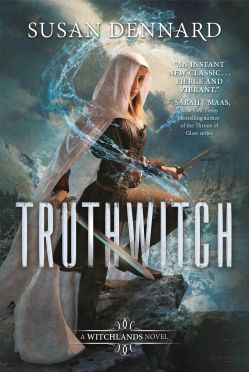 The Witchlands is a series of fantasy novels by Susan Dennard, of which four have been published so far with a fifth installment planned. In addition, there is a prequel book, Sightwitch, offset from the main series and containing some very important backstory information.
Advertisement:

On the eponymous continent, the five Origin Wells cause some people to be born as witches, gifted with supernatural powers. The devastating war to claim the Wells, fought between the various nations of the Witchlands, has only recently subsided thanks to the signing of the Twenty-Year Truce. Unfortunately, that happened nineteen years and four months ago, and permanent peace is nowhere in sight.

Not that Safi and Iseult care. A noblewoman and a runaway, both unregistered witches, they live in the capital of the Dalmotti Empire, learning, playing cards and righting wrongs. Safi, however, is more important than she'd like to be — she's the world's only living Truthwitch, a Living Lie Detector, and when her power is discovered, she's forced to run for her life, Iseult — herself a Threadwitch — the only person she can trust.

On the other hand, Merik Nihar, a Windwitch and a prince, cares very much. His nation, Nubrevna, has been rendered barely habitable by the war, and the surrounding countries refuse to trade with it, hoping for easy prey after the Truce ends. Merik thinks he sees the light at the end of the tunnel when a Cartorran nobleman proposes a trade agreement, but there's a catch — to get it, Merik has to ferry one Safiya fon Hasstrel to Nubrevna. The seemingly simple task is complicated by the hordes of people trying to get their hands on Safi, chief among them Aeduan — a Bloodwitch monk working for a mysterious benefactor, capable of tracking down any living human.

And there are stranger things happening. All over the Witchlands, witches are Cleaving, turning into monsters. Beasts of legends are proving to be all too real. The mythical Voidwitches are popping up again, and they're up to no good. And in the ruins of the Republic of Arithuania, ignored by all, a new king has risen — and his ambitions stretch far beyond what he already has.

In September 2018, it was announced

that the series was being adapted into a TV show by the Jim Henson Company, with Dennard as executive producer.

Tropes present in the books: