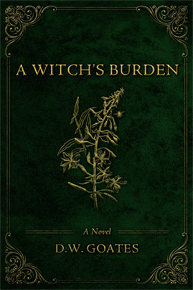 "Only when mankind understands his place will he have arrived—not progressed, but arrived at where he has yet been all along."
Advertisement:

Set in Germany in 1830, the story follows Elke Schreiber, a young woman who travels to the small town of Waldheim for a chance to finally teach in her own classroom. She arrives to find the job was given to the schoolmaster’s niece, despite the letter Elke received offering her the position. Since she has come all this way, she is allowed to assist, but Elke finds little reason to want to stay in the remote valley.

Waldheim is a picturesque village in Bavaria, but the idyllic setting is all it has going for it. Elke hears rumors of the Margrave living in the castle above—his evil deeds are known to all, though when Elke asks for specifics, they are hard to come by. She refuses to believe tales of witchcraft or to succumb to the mindless fear and hatred the others have of a man most have never even seen.

A Witch’s Burden is classified as literary fiction, a work of Romanticism combining existential philosophy with social criticism, dressed in Gothic trappings. The novel is ultimately about Elke's journey to find peace with herself and her place in—or away from—society.

A Witch's Burden contains examples of: