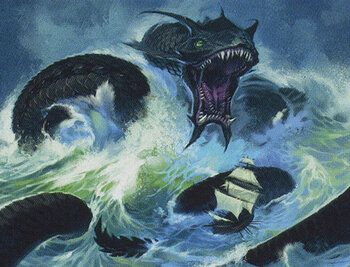 "Sailors fear the deep-sea serpent; others thank the gods it has no legs."

"An appalling head reared itself out of the sea. It was all greens and vermilions with purple blotches — except where shell fish clung to it — and shaped rather like a horse's, though without ears. It had enormous eyes, eyes made for staring through the dark depths of the ocean, and a gaping mouth filled with double rows of sharp fish-like teeth."
— The Voyage of the Dawn Treader, by C. S. Lewis
Advertisement:

Enormous worms and serpents who rise from the deep to drag down ships in their crushing coils, sea serpents are perhaps the most famous and easily recognized type of Sea Monster.

They're usually strictly reptilian creatures, but may be portrayed with more piscine elements such as rayed fins and gills or even entirely fishlike heads. In some cases, they may be outright very big, long-bodied fish—essentially gigantic eels. They're typically limbless, but may possess fins or flippers; articulated limbs are rare.

Sea serpents are often simply oversized snakelike beasts, but some works may link them with other monsters such as dragons. In these cases, sea serpents may be portrayed as a related but distinct species or specifically as a kind of seagoing dragon. Links can also be drawn with lake serpents, in which case they may be portrayed as related creatures. When this is so, either kind may be modeled after the other, either with lake serpents being portrayed as more snakelike than they usually are or sea serpents gaining features such as flippers and plesiosaur-like necks.

Unlike regular snakes, sea serpents are rarely directly associated with poison, but are almost always constrictors; indeed, a common stock pose for these creatures shows them coiled around an unfortunate vessel about to crushed to flinders or dragged down into the depths. Even when they do possess poisonous bites, they're still likely to be portrayed as crushing prey in their coils.

Their exact placement on the Food Chain of Evil can vary, although they're usually fairly powerful creatures. Depending on the work in question, serpents may be among the most dangerous things in the sea or themselves prey to even bigger and more dangerous monsters such as the Kraken and Leviathan.

Overlaps with The Great Serpent.

Slithering in the depths of the Ocean Styx, the Leviathan is a towering Supreme Demon that absorbed countless souls of the damned, and serves as the boss of Wrath's climax.

Slithering in the depths of the Ocean Styx, the Leviathan is a towering Supreme Demon that absorbed countless souls of the damned, and serves as the boss of Wrath's climax.