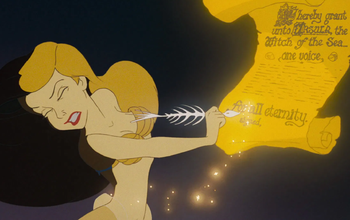 "Hah! You see? The contract's legal, binding, and completely unbreakable, even for you."
— Ursula (to King Triton), The Little Mermaid
Advertisement:

In fiction, particularly fantasy fiction and Deal with the Devil plots, normal Leonine Contracts just don't cut it. Part of the reason for this is because it's usually pretty vague what kind of government most fantasy cultures use, so nobody really knows how contracts would work anyway. What do you do if the other party decides to welch on their end? Besides, we have contracts in Real Life, and they're usually pretty boring Walls of Text. So one sure way to get some excitement is to have a character sign one that is magically binding. There's a good chance that the contract may also be a Comically Wordy Contract.

Where a normal contract is bound by regular laws, this one is bound by the laws of magic. Rather than being enforced by threat of punishment by a lawful governing body, this contract is simply physically impossible to break. Sometimes it is implied that the magic punishment for breaking a clause is somehow contingent on the permission being given by the one who signed the contract.

Really, the easier explanation most of the time is that A Wizard Did It. The basic idea here is that magic is the law, and will punish anyone who tries to go back on a contract. In other cases, the question of punishment doesn't even arise — the magic compels signatories to abide by the terms whether they want to or not. Even the person who receives the benefits may be unable to release them.

Any character who makes such a contract — even if it's a Leonine Contract — has no choice but to fulfill it somehow. Loopholes are, as always, still permitted, and there may be a Curse Escape Clause. Physically destroying a contract can also absolve the penalties. In some cases, magic apparently only works with the magicee's permission. Even Releasing from the Promise may require such trickery; the other character often can't just let you go, even should he want to.

Note that another sub-trope of Deal with the Devil, the Faustian Rebellion, is rarely if ever presented as viable countermand to a Magically Binding Contract. However, should the person accomplish whatever Impossible Task was provided in the contract, then the The Devil has to follow his part too. In this trope, you gotta beat 'em at their own game. Characters who break one of these can become The Oath-Breaker. Compare Geas, which is more of a spell or curse.

Unbreakable Even for You

King Triton learns that his daughter Ariel signed away her soul to the sea witch Ursula and tries to blast away the contact with his trident. As Ursula explains though, the contract is legal, binding and completely unbreakable, even for him.

Unbreakable Even for You

King Triton learns that his daughter Ariel signed away her soul to the sea witch Ursula and tries to blast away the contact with his trident. As Ursula explains though, the contract is legal, binding and completely unbreakable, even for him.