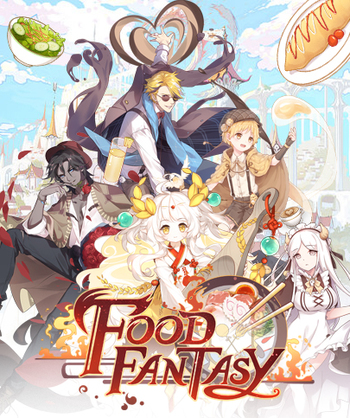 Food Personified Around the World!note Clockwise from the top: Coffee, Eggette, Strawberry Daifuku, Milk, Rice, and Chocolate. (Oh, and around a hundred more unseen)
This is a legend filled with beauty and adventures - Food Souls
They give countless souls the power to survive;
to move beyond the endless darkness that has infested this world and to guide all things forward.
They have answered the prayers of the living and have become the driving force for new dawn.
Advertisement:
They bring the world hope and happiness.
They will forever be a part of this world...
—Intro sequence

Food Fantasy is a story-heavy gacha RPG whose gameplay revolves around two things: A Gameplay Automation battle where you aid your summoned Food Souls in battle, and a Restaurant Management game where you sell a wide variety of dishes and get lots of money. Originally released by Funtoy games in 2017 in Chinese application play stores, it was released internationally by Elex on July 20th, 2018, on the Google Play store and iOS, and later received a Japanese release on October 2018. In early 2019, a second global version for Oceania and South America was released, titled Food Fantasy: New Journey.

You, as the Player Character, had just opened your very first restaurant, and is eager to get started. On the day of your shop's opening, a random woman walks in and becomes your first customer. After complementing your food, she advises you in the way of summoning Food Souls, who would have an easier time in procuring fresh ingredients. So you do so, and of the food souls you summoned, one stood out: Rice, a food soul that could not fight. (and it all goes south from there)