Literature / The Trials of Apollo 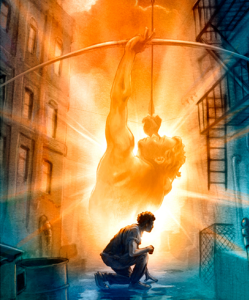 I will never understand how you mortals tolerate it. You live your entire life trapped in a sack of meat, unable to enjoy simple pleasures like changing into a hummingbird or dissolving into pure light.
Advertisement:

Myth Master Rick Riordan's third adventure in The Camp Half-Blood Series, The Trials of Apollo are just that. Having angered his father Zeus at the end of The Heroes of Olympus, the sun god Apollo wakes up six months later after face-planting in a dumpster. He quickly deduces he's been turned mortal as punishment and that usually means a demigod will claim his services until his father is satisfied and he can reclaim his godly status. While he initially hopes that demigod will be prior POV character Percy Jackson, a new demigod named Meg McCaffrey gets to it first.

At Camp Half-Blood, Apollo is quickly welcomed by three of his children, and learns that the camp has been more or less cut off from the outside world. No new demigods have made it in, and no phone calls, e-mails, or Iris-messages can connect. No one has made contact with Camp Jupiter. No one can receive prophecies. The only way to fix things is a quest, but the only way to get a quest is to hear a prophecy— as Apollo describes it, a Catch-88; like a Catch-22, but four times as bad.

The sequel series to Percy Jackson and the Olympians and The Heroes of Olympus, it consists of five books:

As well as two companion books:

The fall of the sun, the final verse...