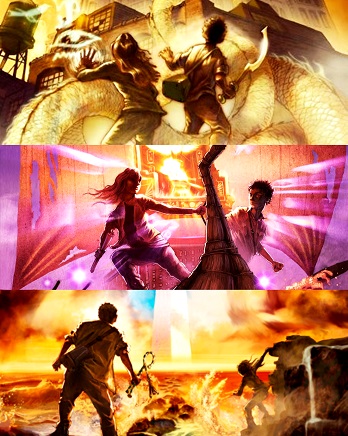 The Kanes doing what they do best.
"We only have a few hours, so listen carefully. If you're hearing this story, you're already in danger. Sadie and I might be your only chance."
Advertisement:

So begins The Kane Chronicles, an Urban Fantasy series by Rick Riordan that follows in the vein of his Percy Jackson and the Olympians and The Heroes of Olympus books. The three books in the series, The Red Pyramid, The Throne of Fire and The Serpent's Shadow all take the larger Egyptian Mythology and transplants it to a western setting. Other books in the series include the companion book The Kane Chronicles Survival Guide and the short story The Son of Sobek, which is a crossover with the original Percy Jackson. Another short story, The Staff of Serapis, was released in May 2014. The third and final story in the crossover, The Crown of Ptolemy, was released with the House of Hades paperback in March 2015 and as a standalone e-book in May 2015. During his The Sword Of Summer book tour in 2015 Rick Riordan declared the completion of the short stories as their own book Demigods & Magicians.

This time, the story centers on siblings Carter and Sadie Kane who discover that they're descendants of ancient Egyptian magicians. This leads them to learning to master their powers while taking up the primary duty of a magician: fighting and banishing the gods once worshiped throughout Ancient Egypt. Some snags in the process include their only possible allies being out to kill them, ancient Egyptian monsters and figuring out how to defeat the god of evil himself.

The books are told from both heroes' perspectives, instead of just one like its big sister series. The books are also revealed to take place in the same universe as Percy Jackson's tale does, with small shout outs to the first series here and there. The tone of the books also shift slightly more towards Darker and Edgier as they go on, but it isn't much of a slide from the first or second books.

. Two supplementary books have also been released, The Kane Chronicles: Survival Guide on March 20, 2012 and Brooklyn House Magician's Manual on

- on TikTok, of all things- that the series would be adapted into a series of Netflix original movies.