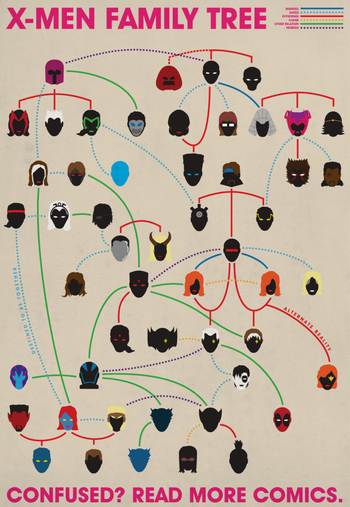 Omitted: Wanda (top left, framed in red)'s robot husband and their own Tangled Family Tree. Or Cable's adopted daughter who may or may not be his mother reincarnated. Or the various retcons that have happened since this graph's creation. Let's leave it at that for your sanity's sake. (See full table with annotated names here)

"If you wannabe a Summers
You have got to live
Through time travel, death, and cloning,
But that's the way it is."
— X-Men filk, to the tune of "Wannabe" by the Spice Girls
Advertisement:

Tropes like Luke, I Am Your Father, Family Relationship Switcheroo, Separated at Birth, Everyone Is Related, My Own Grampa, Cain and Abel and Seth, and the Evil Twin make for drama, and they're an easy way of shaking up the dynamics of a long-running series. Sometimes a little too easy. Layer too many of those tropes onto the same group of characters, and what you end up with is a Tangled Family Tree.

This isn't just a Dysfunctional Family; this is a family with members so numerous, relationships so tangled, and circumstances so bizarre that it's impossible to keep track of them without a flow chart.

Tangled Family Trees are commonly seen in comics and soap operas, both of which have long-running continuities focusing on one group of characters through decades of changing hands from writer to writer. It is also a common phenomenon in mythology, folklore, and oral traditions for much the same reasons (with "long running continuities" being measured in centuries, and different "writers", including oral retellings by people who may or may not have been literate). Indeed, tropes like Continuity Snarl and the Tangled Family Tree happening in modern works of fiction can help us understand exactly how ancient mythology evolved.

Incest, Time Travel, cloning and genetic engineering, reincarnation, Practically Different Generations, Extra Parent Conception, Related in the Adaptation, and Alternate Universes can all contribute to creating a Tangled Family Tree. For obvious reasons, any family with a Tangled Family Tree is likely to be a Big, Screwed-Up Family as well. If it's a case of Royal Inbreeding, this probably overlaps with Royally Screwed Up. Often this is a Continuity Snarl looking for a place to happen, as sometimes a single genealogy can become so complex that even the writers can't keep it straight. This is the kind of family that you want to in-breed just to consolidate the branches.

Compare One Degree of Separation, Everyone Is Related and Love Dodecahedron (which this trope can result from). Contrast Single Line of Descent.

SPOILER WARNING. These convoluted relationships tend to be tied in with every event in the plot, especially the family secrets.