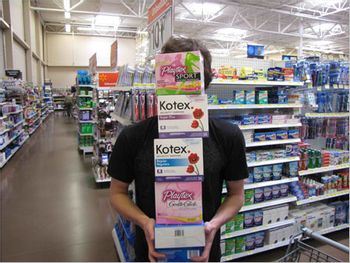 AAAAHHHHH!!! So many kinds!!
"I'm coming down the stairs and I find a large box. I recognized this box because I had been forced to purchase it. And at the time, I bought the largest one I could possibly find so that I wouldn't have to go through that again any time soon. In fact, if they had a silo full of those suckers, I would have dragged that home behind the truck. Big pink silo: Always."
— Jeff Dunham
Advertisement:

Alice just started her period and has run out of tampons. She is busy so she nonchalantly asks Bob, her boyfriend, to get them for her. Bob just stares in horror. Alice explains that she can't go, but she needs them as soon as possible so he would have to get them. Bob freaks out as he embarks on the most horrifying journey to the store that he will EVER have to face: the Tampon Run.

Can also apply to menstrual pads (or sanitary napkins).

Played for Laughs, this trope exemplifies just how much of a big deal men stereotypically make out of menstruation. For whatever reason, testosterone makes men think that this naturally occurring event is the most terrifying thing in the world. He may be seen talking to himself, shouting to nobody in particular upon finding out that "they come in sizes?!?!?!", and trying to hide it. Men might try to play it off by asking if they come in larger sizes. Bonus points if he sees another guy in the same boat or if the sales clerk calls for a price check effectively announcing to the whole store that Bob is buying tampons.

Compare to Wacky Cravings where it is also often exaggerated by the husbands or if the writers are guys and to All Periods Are PMS where the poor unfortunate guy is being sent on the errand because every 28 days his loving mate turns into an evil conniving bitch. Contrast No Periods, Period. Trojan Gauntlet will often involve many of the same embarrassing circumstances and might be the closest possible thing to this trope's Spear Counterpart.